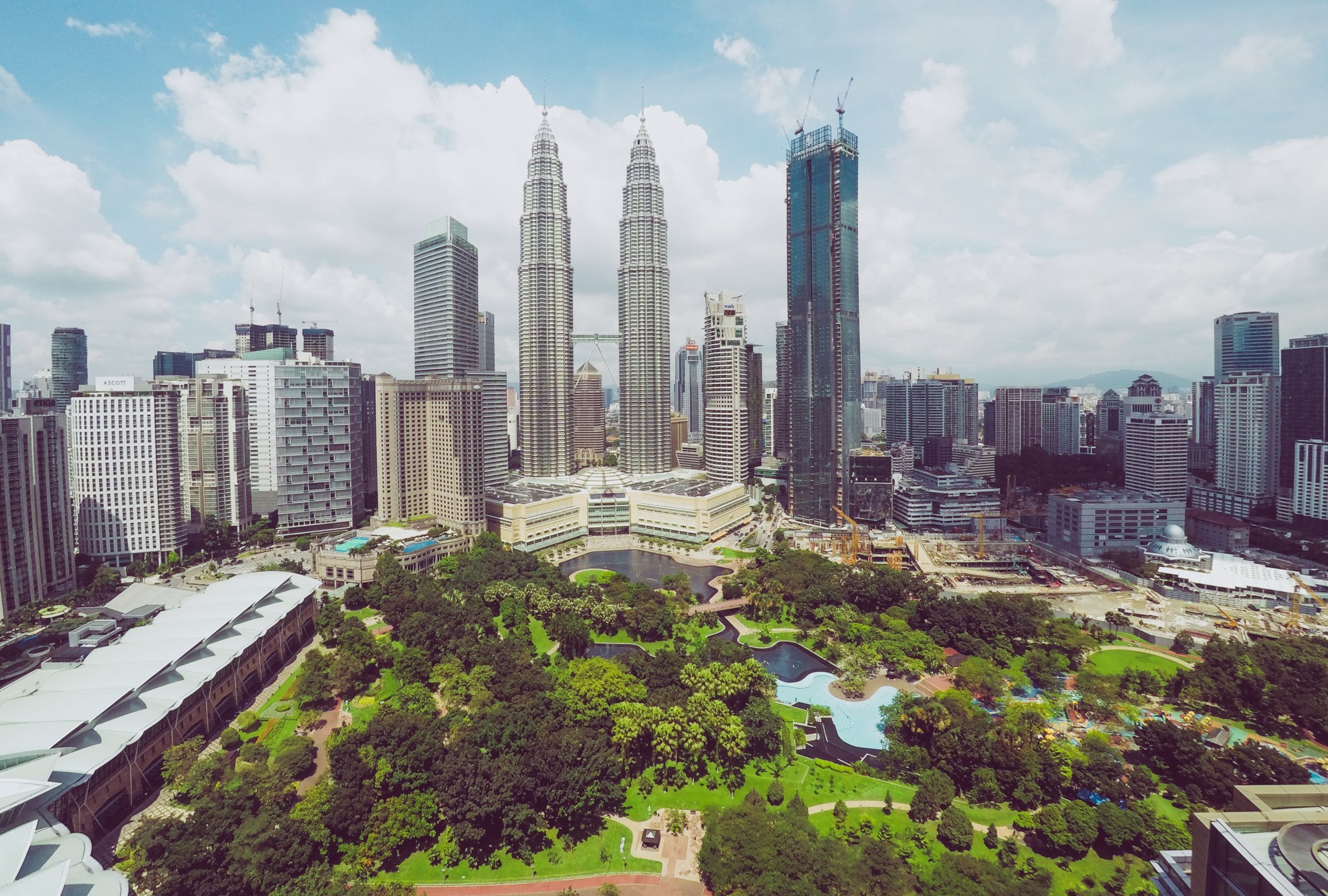 Kuala Lumpur (called simply ‘KL’ by locals) is the federal capital and the largest city in Malaysia. KL is a bustling metropolis of 7 million and is a cultural melting pot with some of the world’s cheapest 5-star hotels, great shopping, even better food and some of nature’s wonders only an hour away-this dynamic city has much to offer for every visitor. The Malaysian capital is known for its multicultural community, which mainly consists of Malay, Indian, and Chinese residents.

WEATHER
Kuala Lumpur has a year-round tropical rainforest climate which is warm and sunny, along with abundant rainfall. It can even rain daily during the northeast monsoon season from October to March. The wettest month is November and the driest month is June. Flooding is a frequent occurrence in Kuala Lumpur whenever there is a heavy downpour, especially in the city centre and downstream areas.

PETRONAS TOWERS
Petronas Twin Towers were once the tallest buildings in the world. Now the world’s tallest twin structures, the 88-storey buildings are both joined at the 41st and 42nd floors (175m above street level) by a 58 metre-long, double-decker Sky Bridge. Standing 452 metres tall, the Petronas Twin Towers retained its world-title until 2004 when Taipei’s 101 was built, measuring 508 metres tall. Today, the Burj Khalifa in Dubai retains the spot as the world’s tallest building.

CHINA TOWN
At the heart of Kuala Lumpur is an area which never sleeps. Chinatown, based in Petaling Street, is a colourful and bustling area which is deeply immersed in Oriental culture, heritage and history and is undoubtedly one of the most popular tourist spots in Malaysia. Chinatown is also a well-known bargain hunter’s paradise, a place where you can find all sorts of stuff from Chinese herbs to imitation goods. At night, its main market area, Petaling Street, transforms into a lively and vibrant night market, filled with hundreds of stalls offering all kinds of goods at dirt-cheap prices- Don’t forget to haggle.

BATU CAVES
Batu Caves is one of Kuala Lumpur’s most frequented tourist attractions, is a limestone hill comprising three major caves and a number of smaller ones. Located approximately 11 kilometres to the north of Kuala Lumpur. The 100-year-old temple features idols and statues erected inside the main caves and around it. Cathedral Cave is the largest and most popular cavern in Batu Caves and houses several Hindu shrines beneath its 100-metre-high arched ceiling. At the foot of Batu Hill are two other cave temples – the Art Gallery Cave and Museum Cave which houses numerous Hindu statues and paintings.

SHOPPING AND SHOPPING CENTRES
Shopping in Kuala Lumpur is one of travel’s greatest pleasures! Kuala Lumpur alone has 66 shopping malls and is considered one of the major shopping capitals of Asia. KL is also the retail and fashion hub for Malaysia as goods are available in every price bracket.
Kuala Lumpur’s premier shopping district, the Bukit Bintang area has the highest concentration of shopping outlets in Kuala Lumpur, which cater to varying budgets.
Suria KLCC is one of Malaysia’s premier shopping destinations due to its location beneath the Petronas Twin Towers.
Pavilion Kuala Lumpur is a recent addition to the cluster of shopping malls in this area and houses a wide range of international retail brands in an ultra-modern complex. Both Suria KLCC and Pavilion malls are connected to each other through an elevated, air-conditioned pedestrian bridge.
There are also many shopping malls in the neighbouring cities of Petaling Jaya and Subang Jaya. Malls such as Sunway Pyramid in Petaling Jaya and Empire Subang in Subang Jaya are very nicely designed, and it is worth making the trip down to have a look even if you don’t plan to buy anything.
Despite the onslaught of malls, Kuala Lumpur still offers some Asian tradition with traditional shopping streets and markets.

FOOD
K.L. is a good place for an introduction to Malaysian food as most people speak English and can explain to you what’s in the dish. Most restaurants close by 10PM, but in the city centre there’s always a few 24hr curry houses or fast food places if you get stuck.
Delicious food can be very cheap too: Roadside stalls operate like a food court with many stalls selling a variety of food. Some coffee shops have tables and chairs by the roadside. Chinatown in the city centre and Jalan Alor in the Bukit Bintang have some of the greatest concentrations of coffeeshops and stalls which are mostly open only at night. Shopping malls’ food courts provide cheap Malaysian food in more hygienic conditions, although the prices will be a little higher.
If you fancy more western style food, all shopping malls have an array of American and western dining options, so you will never be short of choices.

GETTING AROUND THE CITY
Kuala Lumpur’s ambitious public transport system is sufficiently developed to be fairly efficient and convenient, but much room for improvement lies in its integration. The city, like many developing cities, suffers from paralysing traffic jams periodically throughout the day. In the rush hours, consider combining various methods of transport.
KL has a great monorail system and a vast train network connecting passengers all over the city and further afield. The fares are cheap, but like many large cities get extremely busy and crowded during rush hour.
Taxis are also readily available ,however the city’s rail coverage is good enough so that you shouldn’t really need to take a taxi to most hotels and popular tourist hotspots. If you must take a taxi, expect many drivers to refuse to use the meter, particularly during rush hour or when it rains

GET IN:
Kuala Lumpur International Airport is about 50km south west of the city and has been ranked as one of the world’s top airports. KLIA is the largest and busiest airports in Malaysia and is the worlds 23rd busiest airport with an average of 58 million passengers a year. The main terminal building and the satellite terminal handle majority of the international flights, whereas the new purpose-built KLIA 2 terminal handles most of the low-cost carrier operations.